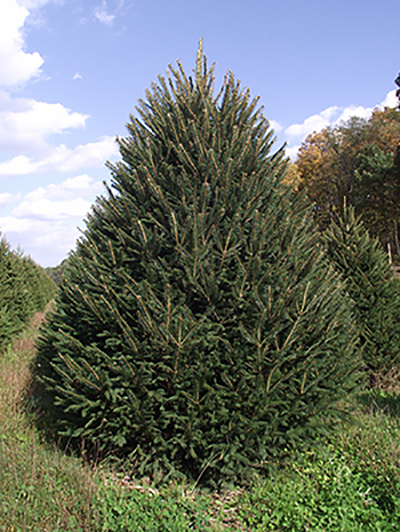 The Norway Spruce is sometimes known as the traditional Christmas Tree. The Norway Spruce is readily identified by its dark green needles and drooping branchlets. Trees have a dark green crown with a triangular shape. Needles are 4-sided (rectangular in section), ½ to 1 inch long, and sharp or somewhat blunt at the tip. Although sometimes confused with true firs, spruces, in general, have 1) rectangular rather than flat needles, and 2) cones which hang down rather than stand erect on the stem.

Cut Your Own:  Sold out for this season

Fresh Cut:  Sold out for this season

We do not recommend cutting Norway Spruce until early December.

(Size and availability may change as the season progresses.)

Cut your own trees are tagged with the price

Colored trees are an extra $4 per foot

Our premium patch of large trees will be individually priced

We offer a selection of fresh cut trees at various prices. Fresh cut trees may be supplemented with hand selected trees from other farms.

All price tags include sales tax. Please do not remove the price tag.

This website uses cookies to improve your experience while you navigate through the website. Out of these cookies, the cookies that are categorized as necessary are stored on your browser as they are essential for the working of basic functionalities of the website. We also use third-party cookies that help us analyze and understand how you use this website. These cookies will be stored in your browser only with your consent. You also have the option to opt-out of these cookies. But opting out of some of these cookies may have an effect on your browsing experience.
Necessary Always Enabled
Necessary cookies are absolutely essential for the website to function properly. This category only includes cookies that ensures basic functionalities and security features of the website. These cookies do not store any personal information.
Non-necessary
Any cookies that may not be particularly necessary for the website to function and is used specifically to collect user personal data via analytics, ads, other embedded contents are termed as non-necessary cookies. It is mandatory to procure user consent prior to running these cookies on your website.
SAVE & ACCEPT